The Town of Los Altos Hills encompasses 9 square miles, making it one of the smallest incorporated towns in Santa Clara County. There is an additional 5.2 square miles of unincorporated land adjacent to the town’s boundaries that is designated within the Town’s "sphere of influence" and may be subject to the Town’s guidelines or annexation.

Incorporated on January 27, 1956, Los Altos Hills had an original population of 2,500, today, a little over 8,000 residents call Los Altos Hills home. Many are drawn to this town because of the beauty of the area-rolling hills, picturesque valleys, and mild climate, much of the same reasons which drew the first inhabitants. One of the most distinctive features of the town is the singular dedication to the preservation of a "residential-agricultural" lifestyle, which is manifested in gracious homes, vast open lands rolling hills, spectacular views of the South and East Bay communities, and a uniquely rural atmosphere-a rarity in the one of most densely populated counties in California. Another significant feature of the town is absence of commercial activity which the founding fathers foresaw, and present residents have long upheld as necessary to preserve the kind of lifestyle they desire by choosing to live within the Town limits. However, there are permitted uses such as schools, religious, and recreational clubs. Combined with the natural beauty, physical assets and the determination of the residents to maintain their rural lifestyles, the Town remains one of the most beautiful, unspoiled, and desirable residential communities in Northern California.

One of the most unique features of the Town of Los Altos Hills, and of which the town is justifiably proud, is its Pathway System. This system of pathways, which comprises approximately 80 miles of beautiful trails and off-road paths meanders around and connects most of the community, a sort of a town’s sidewalk. With the cooperation of the residents, through easements and donations, this unique system is designed to allow users to appreciate the natural beauty of the town at their own leisure, whether by walking, running, bicycling or even on horseback, and in the process get acquainted with other residents. Once a year, the immensely popular Pathways Run is held by the Parks and Recreation Department, and residents of all ages participate in various runs.

The 1st Town Hall was built at no cost to its residents. The land was donated by the Town’s 1st Mayor, Arthur E. Fowle, construction funds were donated by Mr. and Mrs. Dawson, and William Simrell, Jr. provided the architectural services. While it was envisioned to be sufficient space for a very small staff and city council meetings, the space in Town Hall was quickly outgrown. In 1975, the 1st major remodeling was carried out, with the addition of a dedicated Council Chambers building on the west side.

In June 2005, the Town Hall had another facelift when it moved into a state-of-the-art building which encompasses the latest in solar technology, energy and eco-efficiency, yet retaining the rural characteristic that so defines this town, largely due to the active inputs of the Town’s residents. A solar monitor indicates at any time, the amount of energy generated by the solar panels. The Town is proud to be on the forefront of energy self-sufficiency and its design and technology is an example that other city halls and public buildings aspire to emulate. Town Hall also hosts periodic exhibits of works by local artists, and many of these works of art adorn the walls of Town Hall and City Council Chambers. The community donor wall just at the entrance of the building showplaces the residents’ and neighbors’ creative tile designs, and is especially popular with the younger residents. 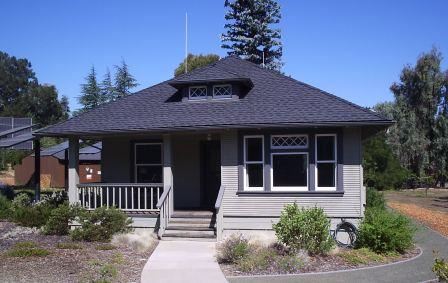 While embracing the latest in technology, similar efforts are also made to preserve the Town’s heritage and historical links, including the design of the present Town Hall to showcase the heritage oak tree. Another defining characteristic of the town’s history, the fruit trees, is not forgotten. Twenty five apricots and prune trees are planted in the area behind the solar panels attest to that, along with historical farm equipment on display.

Adjacent to the Town Hall is the Heritage House, a unique building reminiscent of an old school house. Formerly the Eschenbruecher House in Los Altos, it was donated to the Town in 1984. Today it functions as the Emergency Operations Center and a substation for the Santa Clara County Sheriff Office, as well as office space for staff.